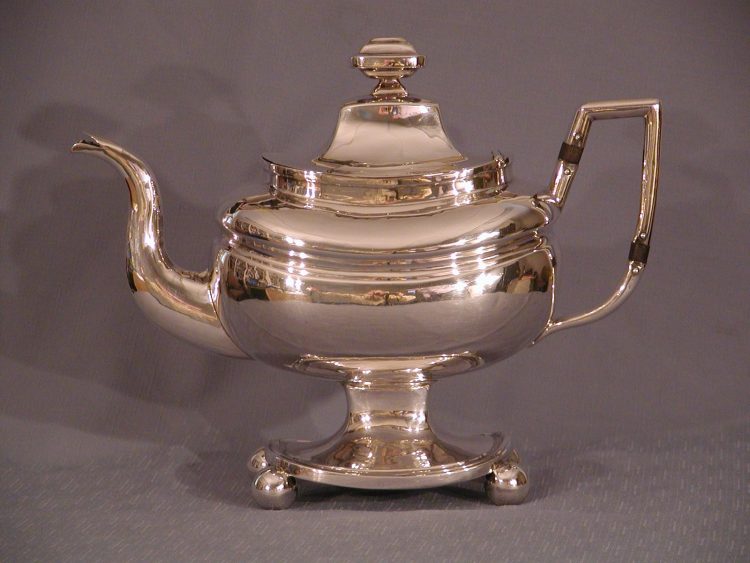 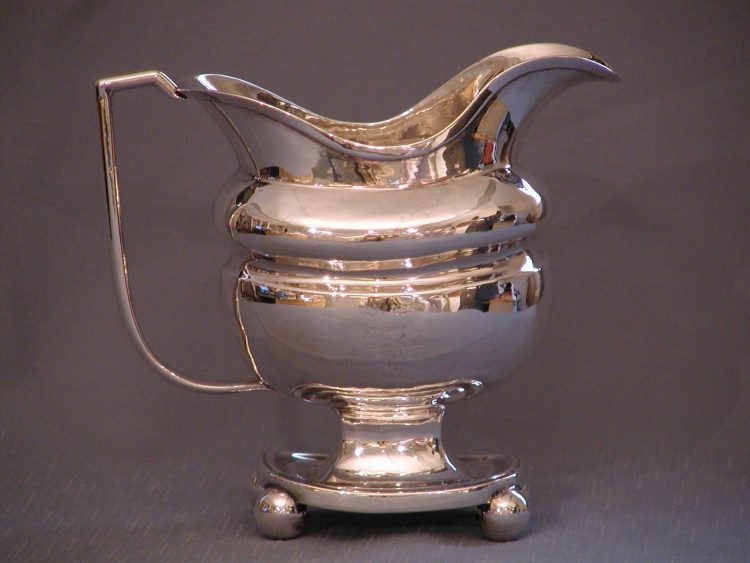 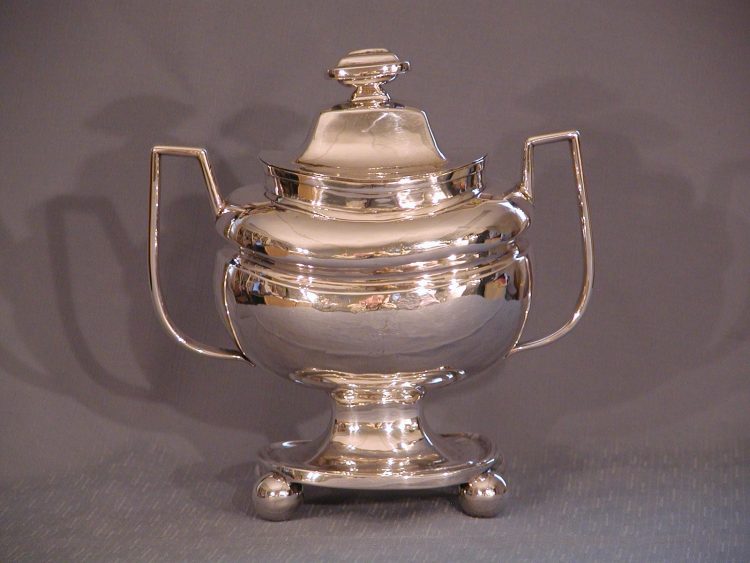 This silver tea set contained each type of dish one would need for a formal tea time, or social gathering. The hinged-lid Teapot is of course to keep the brewed tea once ready, this one has a wood-insert in the handle, possibly indicating restoration was done at some point, or added to separate handle from larger metal piece to prevent the conduction of heat and keep the handle part cool enough to hold. The smaller spouted dish called a “creamer” would have held milk or cream; the piece with the removable lid is the sugar pot.

These three pieces, represent a mostly completed set (some set’s included cups) that most wealthy families like the Jay’s would have had in their home during this period. It is possible that the Jay’s would also have had a canister that stored dried tea leaves.

The hallmarks on the bottom of each piece “W.B. Heyer” indicate they were all made by New York Silversmith William Braisted Heyer, who began working in the city in 1798. Heyer had a business partner named J.L. Gale for many years, with a hallmark that would have included “J.L. Gale” along with Heyer’s name.  But the two parted ways in 1808, after which Heyer’s name was the only one to appear on his work.

Peter Stuyvesant brought the first tea to the colonists in the Dutch settlement of New Amsterdam in 1650. In 1664, the British took over the colonies and were surprised to discover that the colonists were consuming more tea at that time then all of England put together. By 1720, tea was a staple of trade between the colonies and England. It was especially a favorite of colonial women; a factor England was to base a major political decision on later. Tea trade was centered in Boston, New York, and Philadelphia. As tea was heavily taxed, even at this early date, contraband tea was smuggled into the colonies by the independent minded American merchants from ports far away and adopted herbal teas from the Indians.

Due to the large debt incurred during the French and Indian War, parliament was looking for ways to pay it down. In 1767, a large tax was proposed on several items in the colonies, including tea.  Parliament had hoped that because of their zeal for tea, they would accept the tax.  The colonists rebelled and openly purchased imported tea, largely Dutch in origin.  Many colonists stopped drinking tea all together. Many citizens boycotted tea for the duration of the war, turning to coffee instead.

After the Revolutionary war, The United States began trading directly with China.  The newer clipper ships from American moved faster than the English trading vessels.  This broke England’s monopoly on the tea trade and had tea back in the homes of most Americans.

Our set was donated to the homestead in 1991 by Mrs. Trina Norton, a founding member of Friends of John Jay Homestead in 1976, and a friend of the Iselins the last Jay descendants to live at the Homestead before it became a state historic site and museum.