During 2009 and 2010 Friends of John Jay Homestead partnered with the staff of John Jay Homestead State Historic Site to restore Nancy Jay’s bedroom, located on the second floor of John Jay’s historic Bedford House. The bedroom has been restored with custom millwork, textiles, and prints from a rustic 1790s appearance indicative of an employee’s quarters, to an elegant, feminine, 1820s room, fitting for the woman of the house.

Ann Jay (1783-1856), familiarly called “Nancy”, assumed the role of head of household at the age of 19 upon the death of her mother, Sarah. She managed the house for her father until his death in 1829, overseeing household finances and staff, ordering foodstuffs, planning meals, and being responsible for entertaining, home decorating projects, and the gardens.

Previously, the tour of the historic house focused on the lives of John Jay and his son, William Jay. Thanks to the restoration and reinterpretation, it now includes a discussion of Nancy’s role in the management of the household, her life as a single woman in her 30s living in 1820s Bedford, her involvement in the antislavery movement and other reform movements, and her relationships with family and friends. The restoration also provided the staff the platform to expand on important broad concepts such as the role of women in society (privileged and not) and the education of girls in the 18th and 19th centuries. 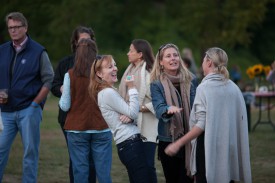