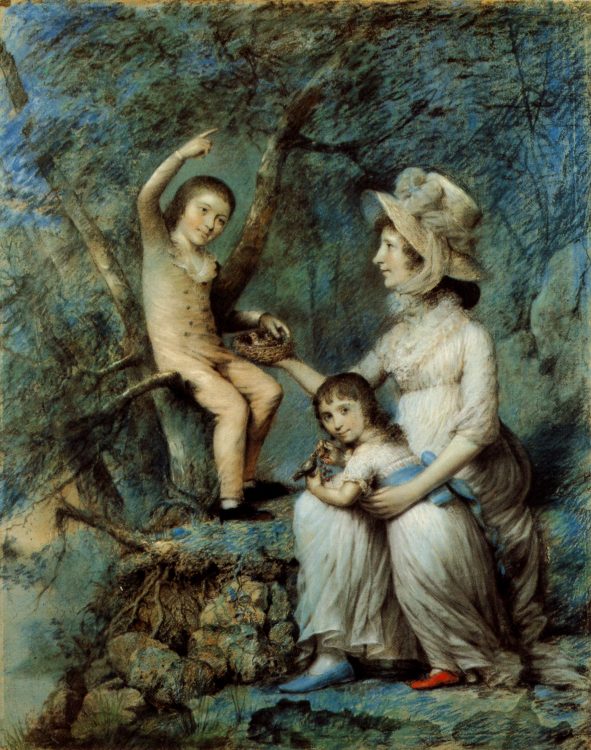 This pastel portrait of Sarah Livingston Jay with her two youngest children, William and Sarah Louisa, was done around the year 1798 by James Sharples. It is possibly the only picture of Sarah Jay that was done while she was alive/from life.

In the pastel, Sarah Jay is seated on the right facing/looking at her son, William Jay, who is sitting in a tree with a bird’s nest in his hand. Her daughter, Sarah Louisa, is in the foreground, holding a bird while resting on her mother’s lap.

At the time of the pastel, Sarah Jay was 41 years old. She was the daughter of New Jersey’s first post-colonial governor, William Livingston, and married John Jay in 1774. Between 1779 and 1784, Sarah accompanied Jay as he traveled to Europe on diplomatic missions. Together they had 6 children, 3 of which were born during these travels, but only 5 who lived to adulthood. She died in 1802 at the age of 56.

At the time of the pastel, William Jay was 9 years old and Sarah Louisa was 6 years old. William was born in New York in 1789 and was the younger son of John and Sarah Jay. He went to Yale where he was educated as a lawyer and later became an ardent abolitionist, using his expertise and background in law to help in the fight against slavery. In 1812, he married Augusta McVickar and together they moved in with his father and had 5 children. He was the 2nd generation to inherit the property. Sarah Louisa was also born in New York and was the youngest child of John and Sarah Jay. As a young woman she was educated in Albany, but unfortunately she died at the age of 26.

Records in the Columbia Jay Papers collection show that a receipt of payment for $150 for a group of portraits from March 27th, 1797 signed “J. Sharples”. Another record can be found in Jay’s account book, dated July 2, 1798 which shows that he paid $10.00 to Sharples for a “Frame to Mrs. Jay’s Picture”.

James Sharples was a well-respected English portrait painter and was known for his work with pastels. His whole family were portrait artists, including three of his children as well as his wife Ellen. Sharples established his business by offering to make profiles of local and national politicians and then using the portraits (of these important figures) as samples to new clients or by making copies of the originals. While copies of portraits of famous people were popular at that time, competition amongst artists was intense and many had to travel in order to find work. Sharples came to New York around 1794, where he was able to use his wife’s connections to continue his business.

Pastel portraits are made with pastels, or crayons composed of loosely held together pigments and minerals. Pastel portraits had a lot of advantages over traditional oil-mediums for both the artist and the client. Portraits using pastel crayons required fewer sittings as there was no drying time, there was less equipment required and the materials were easily portable, making the costs lower.