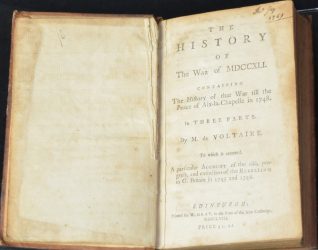 Happy Birthday Francois-Marie Arouet (11/21)! Arouet, best known by his pen name, Voltaire, was one of the most prolific writers of the 18th century. He wrote extensively on world history through a cultural, economic, and political lens while rejecting the traditional Christian framework that marked history books before his time. He also penned upwards of 50 plays, many of which gave voice to his philosophies. We have two books by Voltaire: The History of the War of 1741 (1758 edition) and The Age of Lewis XIV (1763 edition), as well as the Chefs-D’Oeuvre Dramatiques de Voltaire. The title page of The History of the War of 1741, pictured here, was inscribed by John Jay in 1759 when he was fourteen years old.