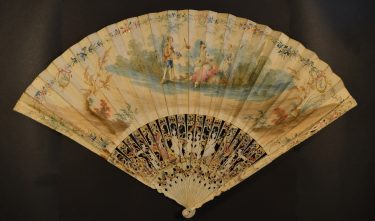 This 18th century fan is thought to have belonged to John Jay’s wife, Sarah Jay (1756-1802). Most of our information about the origin of this fan comes from the opinions of outside curators, all from museums with extensive fan collections. Based on the photos sent to them, most curators believe it is from the 18th century and possibly Dutch in origin. Hand fans have had a range of purpose and use throughout history; they started out as practical objects and were often used in religious ceremonies. It wasn’t until the 18th century that they became status symbols and a part of court etiquette, especially in France. By this time, fans had become more ornate and were often made out of more expensive materials, which allowed one to show off their wealth and status. Fan etiquette was also considered to be an indicator of one’s social standing. Many considered fans to be an extension of a woman’s body language and used to express emotions in a non-verbal manner, as a result, women of high social standing were expected to have a certain level of grace/elegance when using their fans. This led to the idea of “the language of fans”, where women (supposedly) used fan movements as a secret language.