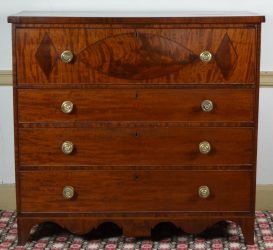 Chest of Drawers
1800-1805
Maker: Michael Allison (1773–1855)
Mahogany, tulip poplar, pine, satinwood, brass
JJ.1966.16
New York
This early 19th century chest of drawers was made by New York cabinetmaker, Michael Allison. The sides are solid mahogany, and the drawers are a mahogany veneer. The decorative inlay on the top drawer, as well as the drawer trim, is made from satinwood. The drawer has a distinctive center horizontal ellipse of mahogany veneer outlined by triple stringing. At both ends of the ellipse are two diamond-shaped satinwood veneers set within vertical ellipses. It also has fine brass knob drawer pulls and keyholes on each drawer. The chest is designed in the Federal style, which is characterized by the use of mahogany wood, as well as its simple designs and lack of ornate carvings.

Following a design commonly found in New York furniture between 1800 and 1815, the flat façade of the chest is arranged with graduated drawers surmounted by a large drawer, all above a hollow-centered serpentine skirt. The chest ends in French feet, which are often tapered, with a concave shape that splays outward.

The chest is attributed to New York furniture maker, Michael Allison. Allison was one of the most prolific cabinetmakers in New York City, active from 1800-1847. His brother Richard (1780-1825), also made furniture but ceased operation in 1813 to become a grocer. Allison is associated with Duncan Phyfe, another prolific cabinetmaker, who was not only his contemporary, but also his neighbor.

Michael Allison promoted himself as a superior cabinetmaker consistently using the best materials, offering the lowest prices, and executing all of his orders with punctuality. He chests from this period are distinctive as he often outlined the drawer fronts with stringing at the edge and hollow-cornered stringing within. While this chest does not have a label, (which is not uncommon) the label used during this period read:

Allison
Cabinetmaker
No. 42 Vesey Street
near the Bear Market, New York
Who has a general assortment of warranted, readymade, furniture on hand