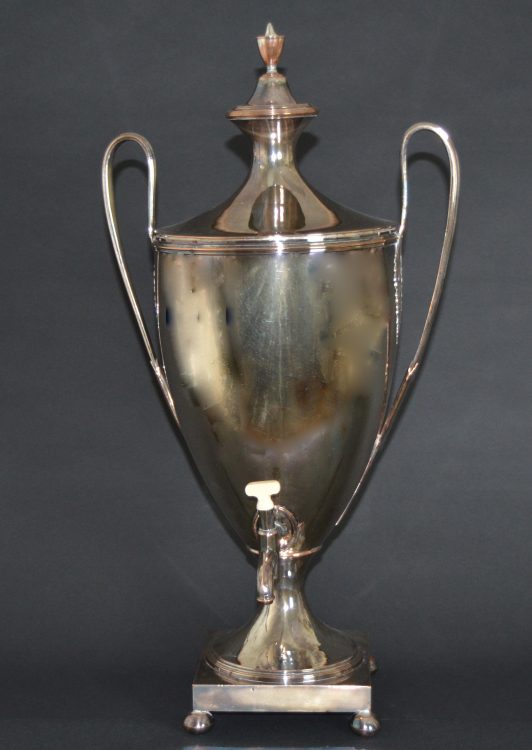 This Sheffield silver plated hot water urn was made in England at the turn of the 19th century.  Sheffield plate is layered silver and copper that is fused together in a furnace.  This allowed manufacturers to sell household silver products for significantly less than sterling silver.  The method was inadvertently invented by silversmith Thomas Boulsover in 1740, when he accidently left a customer’s knife made from copper and silver heating for too long. Sheffield plate became well-known for its soft, glowing grey color, and was mostly used in the making of utensils, and other items used for serving and eating.  The technique is named after Sheffield, England where Boulsover had his shop.

The urn is mounted on a flat base with ball feet underneath.  It has a finial toped lid and an acanthus leaf motif on the left side.  The handle for the spigot is made of ivory.  The interior of the urn has a metal, hollow cylinder running through it. Hot coals would be placed in the metal tube, which in turn would warm the water.  The urn is designed to hold water so that tea drinkers could dilute their tea if it was too strong for their taste. The object is said to have belonged to John Jay.