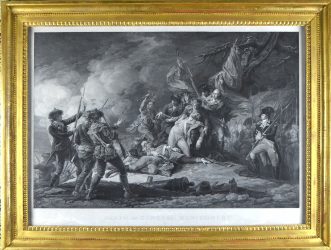 This engraving was part of a series of eight that Trumbull had made depicting different scenes from the American Revolution.
In the print, Trumbull depicts General Montgomery’s death during the Battle of Quebec. The scene can be interpreted as a visual reference to other Lamentation scenes, or scenes that depict the mourning of the death of Christ. It was a common theme at that time to represent the death of a General who died in battle (or any heroic figure who died ‘in action’) in the style of a Lamentation scene.
General Richard Montgomery was a British General who fought for the Colonists during the American Revolution. He was born right outside of Dublin on December 2, 1738 to Baronet Thomas Montgomery, a member of the Irish parliament and part of the landed gentry. Originally, he served in the British Army, but left after he was passed over for promotion; he moved to NY where he married Janet Livingston, Sarah Jay’s cousin, and planned on becoming a gentleman farmer. Montgomery sympathized with American colonists and in 1775, he became a member of the NY Provincial Congress; they soon appointed him to Brigadier General in the Continental Army and then Major General a few months later.
Trumbull saw Montgomery’s actions and his role in the taking of Quebec as brilliant and noble, he had tremendous respect for him and was able/attempted to convey that in his painting.
His depiction of the battle portrays General Montgomery as a martyr and hero for his actions during the battle. As a visual reference to other Lamentation scenes, this scene was meant to elicit sorrow from the viewer and convey a sense of tragedy over the loss of the subject, who is presumed to be important/respected/a hero. By representing General Montgomery’s death in this way, Trumbull is suggesting that his death is something to be mourned in similar fashion, as it was the loss of a distinguished General.
John Trumbull was born June 6th, 1756 in Lebanon, Connecticut. An American painter, Trumbull painted major episodes in the American Revolution. John Jay and John Trumbull met in 1784, during Jay’s stay in London after the Treaty of Paris. However, Jay would have known about Trumbull long before this as both Trumbull’s brother and father were prominent political figures/involved in politics. Jay later invited Trumbull to accompany him to London and act as his secretary during negotiations for the Jay Treaty.
Trumbull’s plates were published in 1798. He always intended for these paintings to be turned into engravings and traveled around Europe, trying to find an engraver that was to his satisfaction. Engravings are made from a carved plate, usually made of metal, which is then covered with ink and pressed onto paper. This process is usually done by a printmaker who would have been looking at the original oil painting.
It appears that Trumbull gave Jay these copies of his prints. It is known that he sent many of his friends and “subscribers” copies of his prints.
In letters to and from Jay, there are several discussions of these engravings. At the end of a letter written to John Jay on July 23rd, 1795, Trumbull mentions the plates for his engraving and the delays which were occurring. Another letter from Trumbull written to Jay on March 6th, 1798, he mentions that his two American plates are finally finished and that he has sent Jay “a pair of proofs of these Prints, which I beg you will do me the honor to accept”. A few months later, on August 1st, 1798, Peter Augustus Jay wrote a letter to his father, telling him he will send Col. Trumbull’s prints to his new home in Albany.

This engraving is original to the house and was acquired from the Iselin Estate. In a 1912 inventory of the house, it was recorded as hanging in the second-floor hallway.