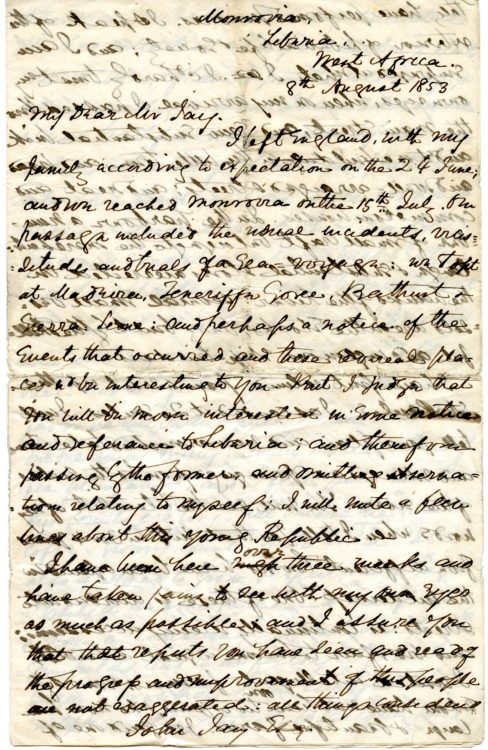 I left England, with my family according to expectation on the 24 June;  and we reached Monrovia on the 15th July.  Our passage included the usual incidents, vicissitudes and trials of a sea-voyage:  we stopt at Madiera, Tenneriffa Gorce (?), Bathurst & Sierra Leone:  and perhaps a notice of the Events that occurred and these several places not be interesting to you.  That I judge that you will be more interested in some notice and references to Liberia;  and therefore passing by the former, send omitting observations relating to myself;  I will note a few lines about this young Republic.

I have been here nigh over three weeks and have taken pains to see with my own eyes as much as possible;  and I assure you that reports you have Seen and read of the progress and improvement of this people are not exaggerated:  all things considered                John Jay Esq. (written at bottom of page in Crummell’s hand)

they have performed honours.  I speak of the exterior of Liberian life & Society;  and I am surprized at what I see.  I c’d hardly trust my own eyes, when on my arrival I had passed thro the main street, and saw substantial brick and stone buildings in this little town;  and neat and well-arranged streets;  and neat and commodious houses.  In the harbour a number of small craft belonging to the merchants;  tough & substantial stones are erected on the banks of the River;  several small vessels are on the Stocks, being built by the Skillful and ingenious ship-builders.

I have just returned from a visit up the St. Paul’s.  I ascended it 20 miles.  I will tell you a plain and unvarnished tale:  Towns and villages are springing up on both sides of the river.  You will see the Literality of my words when I tell you that within 3 or 4 years four different towns have been opened in the wilderness.  One of these is divided into streets:  is continually receiving accessions;  and bids fair to become a great inland City.  I visited intelligent farmers, some of whom have not been over two years, who now have large & beautiful farms.  I regard one of these men, an extraordinary character.  He has collected a large number of plants shrubs, trees, flowers from the wilderness, & is experimenting on them.  I have seldom seen a more beautiful well arranged farm.  The Nations & their Kings have come from the interior to see it;  and one, after looking around in silence, at last sd — “Daddy Yr news gone clear into the bush!”  This man has planted — do not marvel at the number:  it is literally true:  I have seen them with my own eyes —- 100,000 coffee trees!  And in less than ten years, with God’s favor he will be an opulent man:  and he is but one among many:  I saw several other coffee plantations;  and I feel quite sure that this comity, ere long, will become the Great coffee-growing country of the world.  It is also destined to grow & export much sugar.  I visited another farmer —- a man formerly a slave in Louisiana.  I went & saw his Sugar fields, and to his factory.  I found his sugar so good that I have engaged him to supply me altogether at 10 cents per pound, he makes 12,000 lbs a year:  nor is he the only sugar-planter:  I saw several others and I have no doubt that sugar wd soon be exported if these men only had Capital to obtain machinery.

On the river I saw several brick kilns, and large piles of bricks for sale:  I walked a mile, at several places on nice roads.  I am told that two years since there were but three brick houses on the river:  now there are 15 —- several new ones building, — besides frame buildings.

The farmers & Citizens have Cows, oxen, sheep, Goats, Chickens Ducks:  Their breeds are very small:  they have not been crossed it is probable for centuries;  and the farmers have not been able or perhaps, enterprising enough, to send abroad for new breeds.

As you may judge there is much unthrift among many of these people:  much waste of labor:  a lack of scientific acquaintance;  often a feeling of early easy content upon a small return of labor.  But when I think of what these my brethren and their fathers were for centuries in America — how they were driven from their native land and cast, homeless, houseless, penniless upon these shores — a dense wilderness before — a savage population behind them;  and how they have had to work their way up, with fever and disease in their frames — with the sword in one hand, and the hoe or the spade in the other; — I am surprized and wonderstruck at the great work they have been enabled to do in the short space of 30 years!

I speak above of the external of Liberian life and Society:  I fear that socially there is a vast deal to be done, and that in this respect I shall have many annoyances:  but I am determined, please God, I __?__ that my wife and children shall not be dragged & __?__ to a Cow __?__, whether I please or displease my neighbours.

I can say nothing about the acclimating fever:  none of my family have had it.  But so far as appearances go the black Colonist/population appears as strong and healthy as they do in New York or Philadelphia:  their children as active & a deal more free of spirit.  These things I see before me, and cannot but acknowledge them:  and altho I hate the principle of Colonization, I must appreciate the providence of God.  I feel thoroughly assured that there is a great work for thousands of my race to do in America, and that there were sent to do it:  but I feel equally convinced that if many of my acquaintances in New York City knew & saw what I see here:  they wd flock here. — go in the country — become opulent farmers;  and by their sugar & Cotton lay the axe to the roots of the tree of slavery, and send our retribution for the wrongs of their race & their shameful expatriation.

The Bishop has sent me word from Cape Palmas to remain here until his visitation about 4 weeks hence.  Then it becomes quite certain that I shall have to remain here six months or more.  So soon as I see the Bp then I shall know my destination wd that I cd enter upon it at once with all my heart and hand, without delay!  But I must be prudent for a while at least;  altho it is trying to see such land & friends of usefulness open before one — Colonists & heathen – needing & seeking the Gospel and the CH. — and set to be kept from preaching & laboring among them.  The CH _?_ has now the finest opportunity;  and if she only embraces it, she will establish her supremacy immediately, for all future times.  I have been here 3 weeks, and already one Candidate for orders, is leading the Gr. Leest with me, and I am directing him in Theology;  another will be with me in a few days;  and a third desires me take him also;  all these are Colonists & lay men.  I have already received invitations to establish the CH in 3 different places;  and I hope ere long to commence occasional services at a small town on the St Paul’s.

I presume you have heard from Mr Auriol (?) ere his relation to the CH fund;  and I hope recd a printed paper of accts.

I did not ask for anything for myself, after much consideration I came to this decision.  [“August 8 — 1853” written in superscript]  I recd a letter from Mr Tyson on previous to my sailing — a letter wh I will not characterize:  Mr Tyson informed me I am indebted to him some $40 and more.  Mr Tyson had recd some 6 or $700 from me from England for the CH;  and is now receiving the interest of money I collected in England.  Now inasmuch as I have labored for nothing for the CH;  ought he not have settled this matter in my favor long ago.  The CH ought to ___?___, a certain sum every time it gets funds from England;  until this acct is settled:  and when I say the CH — it is as much as saying Mr Tyson himself;  all the monies pass thro his hands:  and know this I cannot do otherwise than express dislike of Mr Tyson’s course.  I was in hopes I shd have nothing more of a disagreeable __?__ to __?__ relation to this.