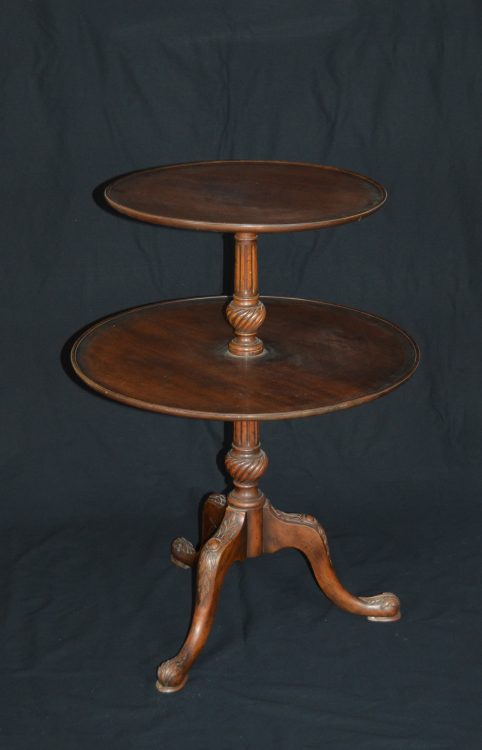 This type of table is called a “Dumbwaiter.” An 18th century issue of the British Gentleman’s Magazine described how the rotating trays on these tables made them a replacement for servants and butler’s in many households in England at the time

A favorite form of fashionable entertainment among the upper classes of England in the early eighteenth century was a fruit or sweetmeat banquet. Essentially, these were grand desserts which were set out very elegantly. Wines were served by several goblet boys and/or waiters, who circulated around the room with trays full of glasses, along with flasks and bottles of wine.

The presence of all those waiters and goblet boys put a considerable damper on conversation. It was well known at that time that servants were always listing for any tidbit of information they could use to blackmail the people concerned or to sell the secrets to professional blackmailers.

By the late 1730s, some clever furniture designer or cabinet-maker found a solution to this problem. This completely English furniture form was called the dumb-waiter, since it would serve in place of a human waiter. These mahogany “waiters” were both deaf and dumb, and were therefore unable to hear or tell secrets. Thus, they became popular in upper class homes, especially for sweetmeat banquets.

In daily use, when the ladies retired after dinner, the dumb waiters were placed either end of the table by the footmen and laden with drink so the gentlemen could help themselves without too much exertion when the staff retired.

Sometimes it was wheeled in at the end of the meal, piled high with sweetmeats, fruit and cheese, for the diners to help themselves; sometimes it sat by the table for all of an informal breakfast or supper, and held glasses, plates, cutlery and wine as well as food.

The small elevators we know today as “dumbwaiters” did not appear until the 19th century.