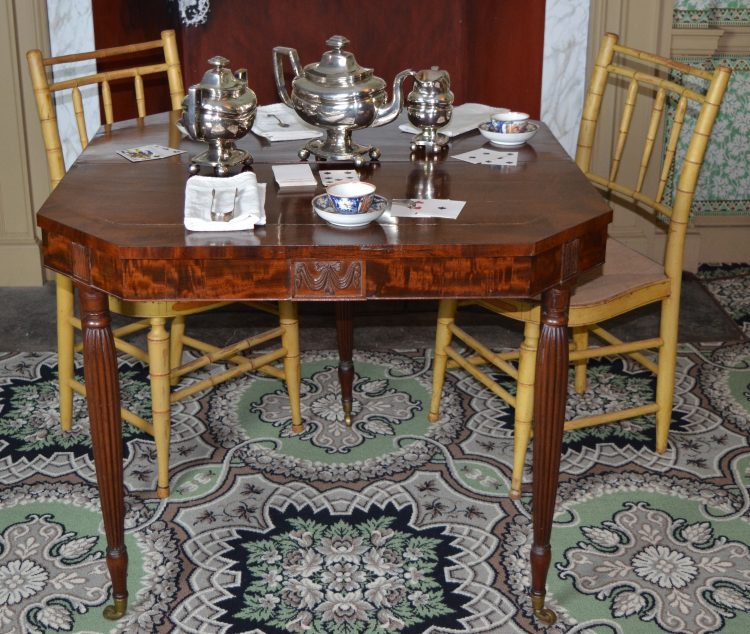 This mahogany card table has a folded octagonal top and a fifth leg, or “fly leg,” that was used when it was opened all the way.  Fold-over card tables, either rectangular or circular were introduced during the mid-18th century, and continued to be made until the 20th century.  The term “card table” refers specifically to small folding tables like this, that were purposed for playing tabletop games, and other casual household activities.

Cards and tabletop games became common in the late 18th and early 19th centuries, as people from different economic backgrounds had more leisure time. Poker, Whist (a forerunner of Bridge), Piquet (another trick-taking game, but for two players), and Old Maid were among the most popular card games of the 1800s.

The tapered, fluted legs of the table are decorated at the top with festoons and bowknots in relief.  The legs have brass casters at the bottom.  Casters allowed for furniture to be easily moved and protected the legs and floor from damage.

There is a record of a receipt for two Gaming Tables from Anthony van Santwood, who moved the Jay family household belongings from New York to Albany in 1797.  Jay was serving as New York State governor at the time and moved to Albany when the state capital was relocated there.