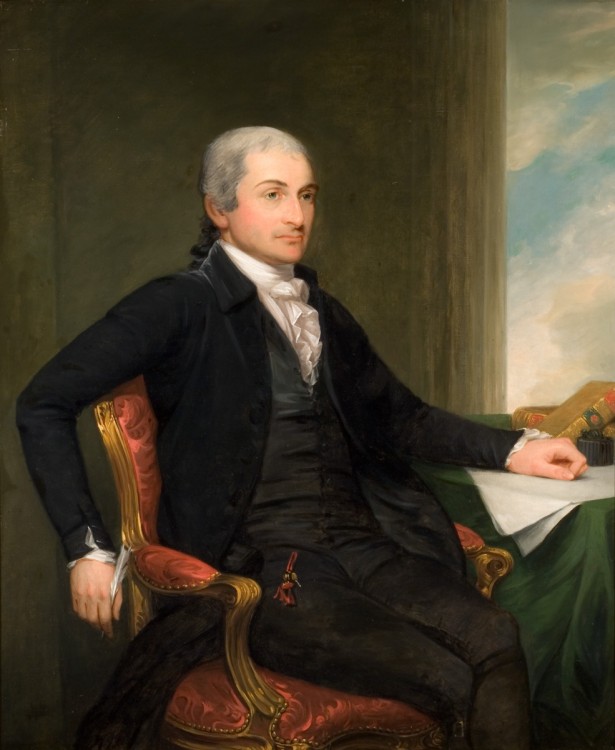 This portrait of John Jay is a copy of Gilbert Stuart’s original painted between 1784 and 1794. In it, Jay is shown with powdered hair, wearing a black coat, breeches and stockings. On the table are several books and he is holding a quill pen in his right hand. Jay sat for Gilbert Stuart while he was in London in 1783 and commissioned two paintings from him. Scholars aren’t sure whether Stuart consigned the unfinished portrait of Jay, which was then purchased by John Trumbull, or if he finished it in 1794 and delivered it to the Jays himself. Jay notes in 1796, that he had two paintings of himself by Stuart; Peter Augustus inherited the Chief Justice portrait and William Jay inherited this one. While the origins of this copy are unknown, physical evidence suggests that the painting was done between 1800 and 1840. This copy passed through the Peter Augustus line before it was purchased for our collection; the original, which was inherited by William Jay, was later sold to the State Department.

At the time of the painting, Jay had spent the last decade tending to matters of the Revolution. He served on both the first and second Continental Congress and was president of the second. He then was sent to Spain as Minister Plenipotentiary but was unsuccessful in garnering support from Spain. In 1782, he was sent to Paris as part of the commission to negotiate peace with Britain where he signed the treaty that ended the Revolutionary war and established the United States as its own country.

Gilbert Stuart was a prolific and renowned artist during the late 18th century. Born in Rhode Island, Stuart showed talent at the young age of 15 and later moved to Scotland in order to pursue his studies. During the American Revolution, Stuart found it hard to get commissions in America and traveled to England in hopes of finding work there. At first, he was unsuccessful; however, after studying under Benjamin West, he began to get a number of commissions. Due to his extravagant lifestyle and overspending, he had to flee England in 1787 to avoid his debts, and again in 1793, when he fled to America. By the end of his career, Gilbert Stuart had painted the likeness of more than 1,000 American political and societal figures. He died in 1828, deeply in debt.