Be an Object Detective – can you guess what today’s Mystery Object is? 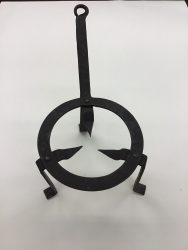 Here are some questions to answer about the object:

Why do you think this object is made of metal?

Why does the object have three legs and a long handle?

What do you think this object was used for?

Yesterday’s Mystery Object was a Scale 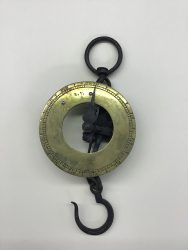 This is a scale made of iron and brass. Scales were used in cooking. Ingredients were usually measured out in weight, not volume. For example, instead of measuring out a few cups of flour to make a cake one would measure out a pound of flour. The scale would be hung from the ceiling and a tray, or bowl, with a handle, would be hung from the hook at the bottom. Flour would then be added to the tray. The weight would move the pin along the curved, brass, measure. Once the pin pointed to the correct weight, the cook would take the flour and use it. Also, you may have noticed that there is a K at the top of this scale. That means that each number marking around the scale refers to that number in kilograms. Many cookbooks followed the metric system and many items were traded according to metric weight, so a scale that measured in kilograms would be more helpful than one that measured in ounces and pounds.

You may view the Mystery Object archives HERE