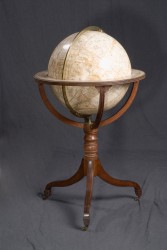 John Jay’s original celestial globe is an optical planetarium, made by notable British globe makers William Bardin and his son Thomas Marriot Bardin, who began production of their globes in 1790. The celestial map shows positions of stars, clusters, nebula, and planetary bulae. The months of the year and corresponding zodiac signs are around the base. The globe is based upon a charting from 1800 by Nevil Maskelyne, Astronomer Royal of Britain at the time, and one of the pioneers in the field. Jay also owned a reflecting telescope, purchased in 1791, demonstrating an interest in astronomy, an interest shared by other Founding Fathers. In fact, Thomas Jefferson owned a very similar celestial globe, also by the Bardins; however, his globe was lost over time. Learn more about Thomas Jefferson during our Thematic Tours offered Thursday through Saturday at 2:00pm throughout the month of April.