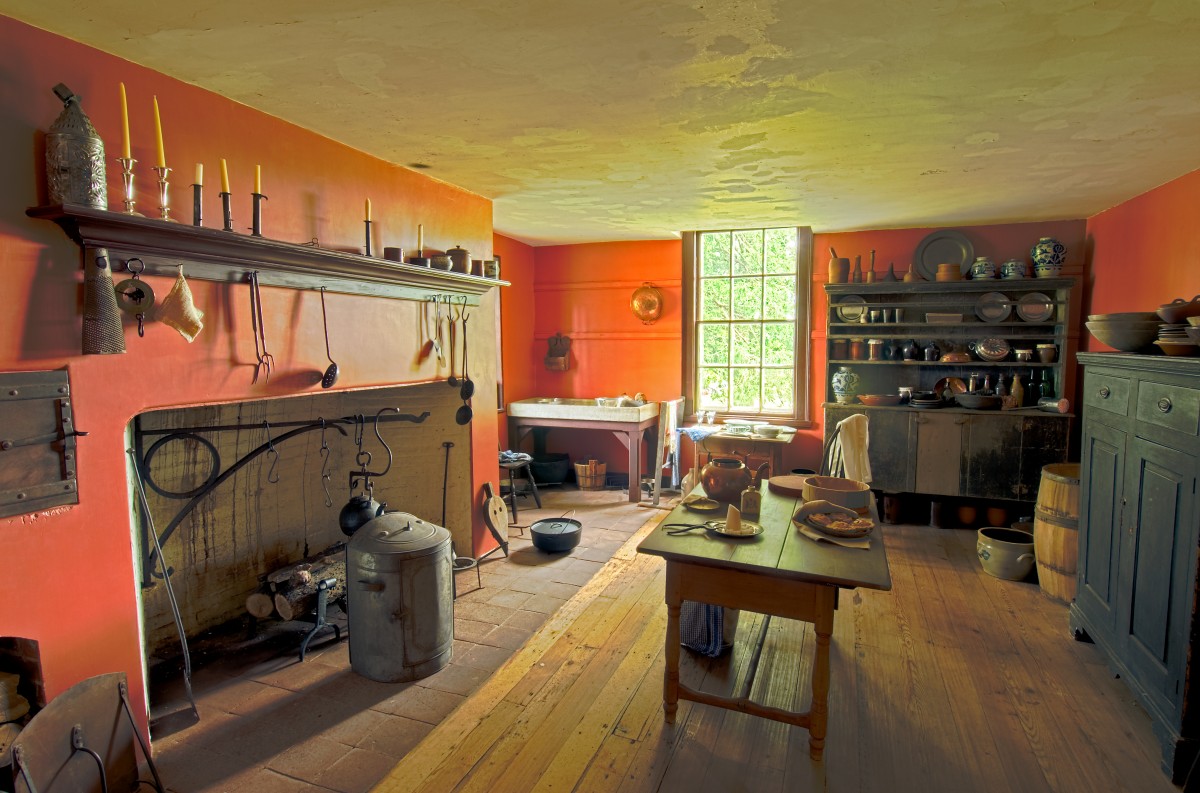 The kitchen is in a part of the house that was part of the 1800 enlargement of the 1787 house. There are also two cellar kitchens. The kitchens downstairs were used most frequently during the summer, since it was cooler to have the large open hearth away from the family’s living space. The kitchen on this floor was used more heavily during winter, since the heat of the open fire would help to heat the house.

Water was heated continuously on the hearth for various purposes. Cooking was performed in hanging pots, in the reflector oven, over “burners” of burning embers on the hearth, and in the baking oven. The room would also have been equipped with barrels and crocks for storing food; additional deliveries of produce could be made through the door on the east wall. This was a 750-acre farm by 1800, and while most of the produce raised here was raised for sale, some of it was used by the family. Laundry could also be washed in the kitchen, in the drysink. All these jobs were extremely labor-intensive, and some carried danger: one of the leading causes of death of women in the early 19th century was infection brought about by kitchen burns. Women commonly wore woolen dresses in the kitchen because the skirts were less likely to catch fire than cotton or linen.

Cooking was hot, difficult work; the Jay women probably cooked very little, if at all. John Jay employed white servants, free black servants, and, for some time, slaves. Jay’s actions in regard to slavery were mixed. He had grown up in a slave-owning family, and inherited slaves from his parents. He purchased a few slaves himself, and kept them in bondage until he calculated that they had worked off their purchase price. Yet he opposed slavery in principle, and was a founder and first president of the New-York Society for Promoting the Manumission of Slaves. Manumission was a gradual process for ending slavery by the private act of the slave owner. It provided a period in which a slave would labor to repay the cost of buying him or her; during this period the slave could also be educated to prepare for emancipation, when he or she would need to be able to take care of him/ or herself. Jay freed his own slaves in the early 19th century. Some chose to remain with the family as paid employees. One, Zilpah Montgomery, is buried at the Jay family burial ground in Bedford.