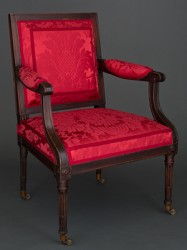 This is one of a set of twenty-six armchairs made around 1789 for use in the United States Senate Chamber in Federal Hall in New York City. After New York stopped being the national capital in 1791, it continued to be the state capital, and the chairs found a new use as part of the governor’s furniture. Jay used the chairs during his two terms as governor, and was allowed to keep some of them by an act of the New York Common Council.