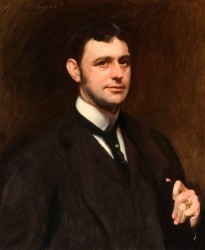 This portrait of Colonel William Jay was done by John Singer Sargent in 1888, when Jay was 47 years old. William Jay was born in 1841 and was the only son of John Jay II and Eleanor Field Jay. Like previous Jay generations, William became a lawyer after graduating from Columbia University in 1859. He went on to serve in the American Civil War from 1861-1865, achieving the rank of Lieutenant Colonel before he retired in 1865. During his service, Jay was involved in some of the Civil War’s major battles, such as the Battle of Chancellorsville, Gettysburg, Bull Run, and Appomattox (to name a few).