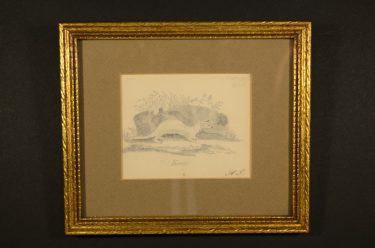 Nancy was educated at the Moravian Young Ladies Seminary, located in Bethlehem, Pennsylvania.  Many of her letters reflect an interest in the natural sciences and the scientific names and identifications of plants.

The image is of the Black-Footed Ferret.  While the Black-Footed Ferret is indigenous to the western United States, ferrets have been featured in European Art for centuries.  Ferrets came to the Eastern United States beginning in the 18th century.  They came by ship to help control rat problems.  Over time ferrets became very useful in pest control.  There were even ferret professionals, who would come to your farm if you had a pest problem. The ferrets chased pests out of their shelter and dogs and men caught them.
You may view the Object of the Day Archives HERE