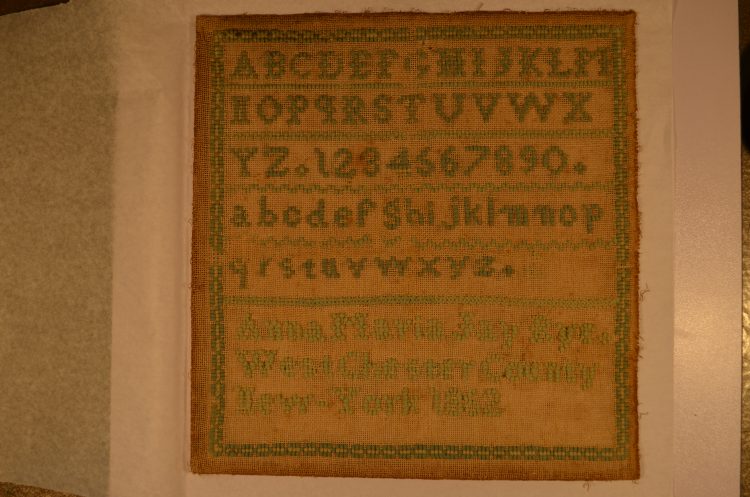 This child’s sampler is made of loose-woven linen, with numbers and letters cross-stitched with wool thread. There are two rows of alphabets cross-stitched, one row of upper-case and one row of lower-case, as well as the numbers 1 to 10. On the lower half of the sampler, it reads, “Anna Maria Jay Rye Westchester County, New York 1852”.

This cross-stitch sampler was done by Anna Maria Jay (1843-1858), who was 9 years old at the time. She was the daughter of John Clarkson Jay and Laura Prime, and the great-granddaughter of John Jay. Unfortunately, she died in New York City at the age of 15.

Samplers like this one by Anna Maria were used as an educational tool in the 19th century to test or display one’s needlework skill. Since many household goods needed to be sewn or repaired, samplers became a common method of practicing this essential skill.

There were very few books containing common or fashionable patterns for sewing so samplers became a type of reference book for embroidery patterns of that period. Often, they had elaborate designs of tulips, roses, strawberries as well as other floral designs or geometric patterns.

The earliest samplers in museums today date to the 16th century; samplers from the 17th and 18th century were mainly made by adults for practical purposes and not used for children’s education at that time. It wasn’t until the 19th century, when this one was made, that samplers had become more of an educational tool for young girls to not only learn needlework but practice their letters and numbers as well.