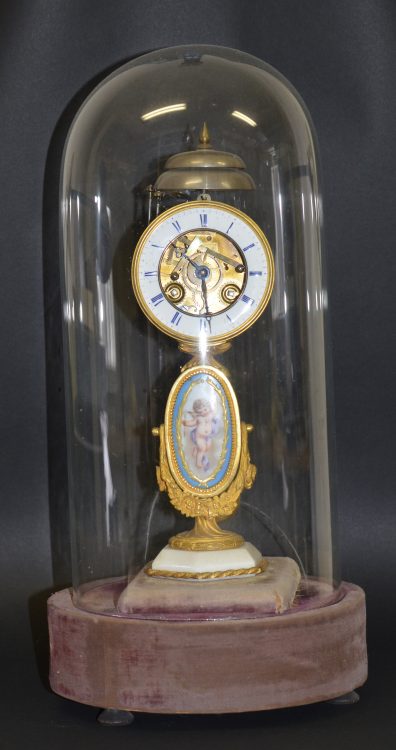 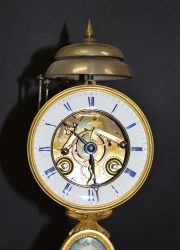 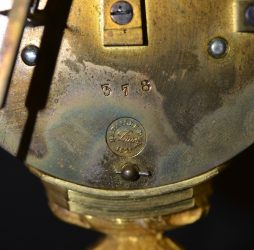 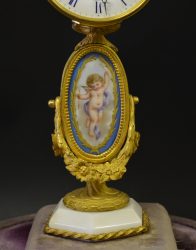 Made in Paris in 1827, this clock is made primarily of ormolu and other metals. Ormolu is a gold-colored alloy of copper, zinc, and sometimes tin which is cast into desired shapes and often gilded. It has a hexagonal white porcelain base, which sit atop velvet covered wood. It is decorated with a Sèvres porcelain painted cherub and a gilded festoon (garland of flowers).

Stamped on the piece is Pons Medaille D’Or Paris 1827.  Honoré Pons (1773-1851), was a Parisian clockmaker who set up shop in 1803 and is generally recognized as being most active between the years of 1807-1846. Pons timepieces were manufactured in the French town of Saint-Nicolas d’Aliermont, and then sent to Paris for completion.  Pons could manufacture beautiful, accurate timepieces at a fraction of the cost of other makers, due to his precision and self-invented machinery. Pons is credited with revitalizing the French clockmaking industry after the Revolution.

The clock is a ting tang clock. It is named as such because of the sound it makes. The clock strikes ting tangs every quarter of an hour which is a rare feature for a French movement clock. It strikes one ting tang on 1/4 past, 2 ting tangs on 1/2 past, and three ting tangs on 1/4 to; with the number of hours striking on the hour.

The clock has its original porcelain dial with blue Roman numerals and original hands with a skeletised center where all the mechanical wheels can be seen working.

Sèvres porcelain is a hard-paste, or true, porcelain. Made at the Royal Factory (now the National Porcelain Factory) of Sèvres, near Versailles, from 1756 until the present; the industry was located earlier at Vincennes. On the decline of Meissen (German porcelain) after 1756 from its supreme position as the arbiter of fashion, Sèvres became the leading porcelain factory in Europe. Perhaps the major factor contributing to its success was the patronage of Louis XV’s mistress, Madame de Pompadour. It was through her influence that the move was made from Vincennes to Sèvres, where she had a château, and through her that some of the foremost artists of the time became involved in the enterprise.

The maker of the rest of the clock is unknown.