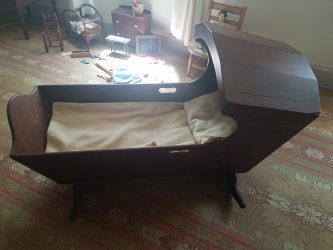 This early 19th century hooded cradle is made from either mahogany or walnut wood and appears to have its original finish. It also has an unfinished pine plank bottom, which may have been done later on to replace the original, as this plank bottom is screwed into the cradle. While we believe it was made in New York, there are no maker’s marks on the object to tell us exactly who made it.
By the 19th century, cradles were common in most households. In some (wealthier) households, women would have been employed as “rockers”, whereas in poorer households, it was the responsibility of the various family members to take turns rocking the cradle.

This wooden cradle comes from the house of Jeremiah Clark, a descendent of Nathan Clark who settled Bedford around 1780. The cradle was donated by Jeremiah’s great-grandchildren, even though there is no direct connection to the Jay family.